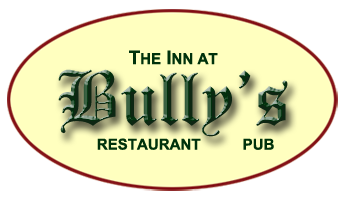 At their historic location which has been providing hospitality since 1903, the current owners are proud to continue the time-honored tradition of operating a full service Inn, Restaurant & Pub. It all began for owners Dave and Sherry when, after spending 20 years in the insurance industry, they decided to leave the corporate world and pursue the dream of becoming restaurateurs. A few months into their quest for a possible opportunity, they were shown Bully's, and Dave, a former custom cabinet maker, took one look at the antique, hand-carved back bar and said, This is the place. Little did he know at the time, but it would prove to be harder than he could possibly imagine. However, after 11 months of renovating, cleaning, painting, and restocking of equipment, food, and staff, the couple re-opened Bully's on October 30, 2000. As with most new businesses, the first several years proved to be challenging, but with the owner's unrelenting hard work, dedication, and innovative attitudes, they continued to improve and grow. 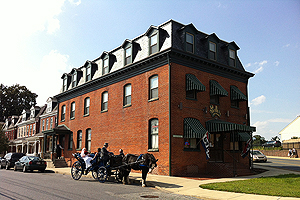 Dave became head chef of Bully's by the advent of their second anniversary. He had learned the trade from a succession of accomplished chefs and became adept at controlling the quality of the food, as well as its origin. Dave has always made an effort to insure that the freshest and most local ingredients are used. At the same time, Dave brought in family to join the business, and early on their son Adam came to work as a part-time dishwasher. As Adam worked his way up to kitchen staff, he developed a passion for cooking and thus decided to pursue a career as a chef. After graduating in 2006 from the Pennsylvania School of Culinary Arts, Adam began to assume the head position and soon became Bully's Executive Chef. Dave and Adam continue to work closely on the day to day operations to make sure they always offer the freshest quality food along with superior service. They have won numerous local awards for their overall customer satisfaction.

Meanwhile, Dave and Sherry continued to reinvest in their business. In the summer of 2010, they realized the second part of their goals for the business when they opened The Inn at Bully's. After a three-year renovation project, they returned the old railroad hotel to its roots by offering their customers the additional service of top quality Inn rooms. By utilizing Dave's cabinetmaking skills and knowledge of construction, along with Sherry's degree in Interior Design, they, through their tireless efforts, created a beautiful, comfortable, and hospitable Inn. The couple, who now add the title of Innkeeper to their resume's, proudly welcome all to their Inn which offers 11 completely renovated and well-appointed rooms, all with their own private bathrooms. The Inn welcomes guests as diverse as traveling tourists, local patrons celebrating special occasions, wedding parties, or business travelers.

In the autumn of 2010, Dave and Sherry were honored by the Historic Preservation Trust of Lancaster County who awarded them the C. Emlen Urban Award for Preservation, in recognition of exterior renovations to the facade.

In addition to Bully's Restaurant & Inn, the facility includes the property across the street which houses The Flour Child pastry and bake shop. The bake shop is owned and operated by pastry Chef Alixe Ingoglia, who provides inn guests with a sumptuous continental plus breakfast. The bake shop building was fully renovated in 2009 by the owners, and coordinates with the colors and themes of Bully's.

Bully's is truly a family affair and the owners consider their long-time employees, always a delight to regular customers, to be part of their extended family. Thus, Dave and Sherry extend a warm invitation to all; bring your family, friends, or business associates, and experience an excellent meal, chose from a plethora of drink choices, or enjoy a soothing break at our lovely Inn! 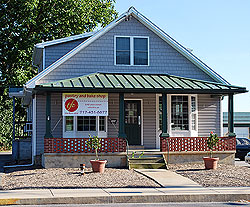